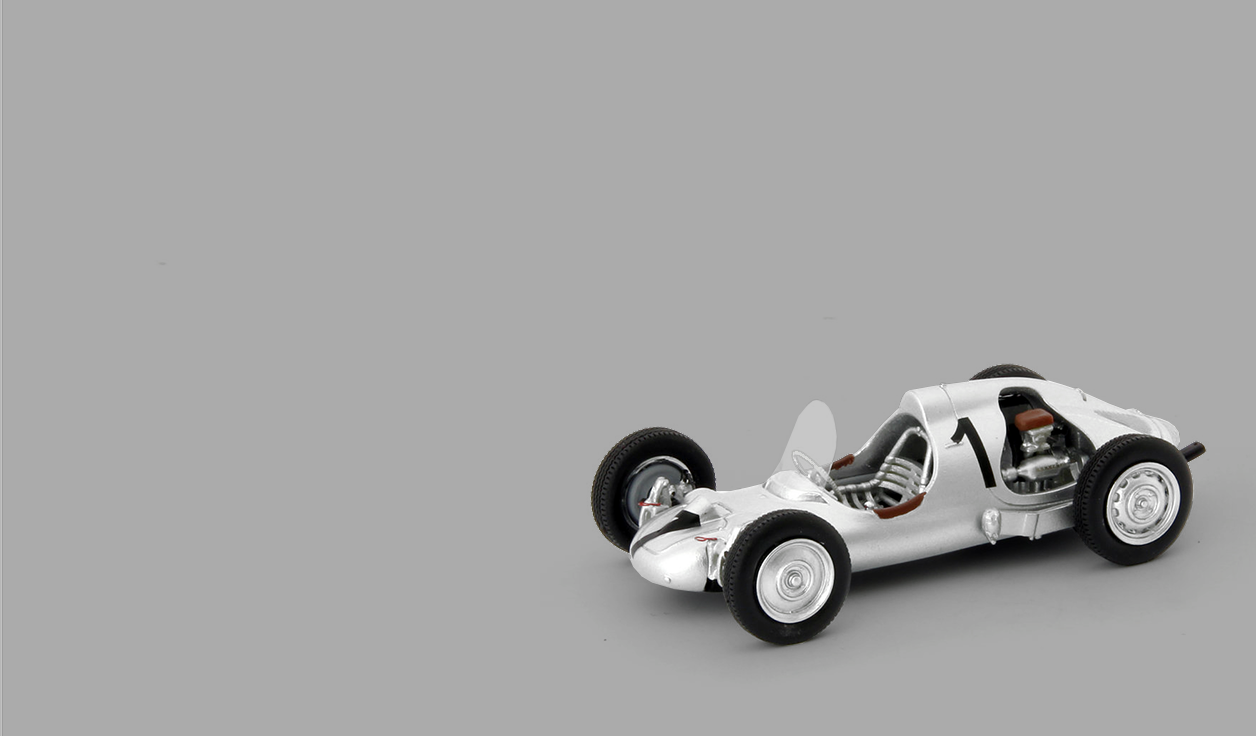 Niche scale model car manufacturer AutoCult has announced its latest releases and, not surprisingly, they are obscure and probably quite unknown to even the most intensely nerdy car enthusiasts. The wide mix includes everything from a Porsche powered special racer and Ford Thames race transporter from 60s era Team Lotus to truly obscure cars like the three-lighted Gatso Aero Coupe and a Spanish take on the BMW Isetta dubbed Triver Rana. More “mainstream” in the schema of AutoCult is the Giugiaro designed Audi Asso di Picche concept car.

Here’s a rundown of the highlights. 1973 Audi Asso di Picche (1:43)
In the early 1970s Giugiaro created a series of 3 cars under the term Asso (Italian for ace). The first car of his series was called Asso di Picche (ace of spades). As chassis he used the recently presented Audi 80/B1. Over the state of the art at that time he put new bodywork, which looked like a mixture of two former design studies of him. One named Boomerang – deducted from a Maserati Bora – and the other one was an Alfa Romeo Caimano made in 1971. The Asso di Picche wore the typical four rings between its narrow grill quite natural like it would have been made at the Bavarian plant of Audi in Ingolstadt. Nevertheless the unique car was built without any contribution of Audi.

The Italian design study was presented at the international motor show in 1973. But all the interested and excited visitors hoped in vain – the Asso di Picche remained a dream. MORE 1965 Bizzarrini 1900 GT Europa (1:43)
Giotto Bizzarini definitely belongs to the important names in the history of the Italian motoring scene.  At the plant based in his home Livorno Bizzarrini planned to produce a sports car, which should meet the needs of general public. Initially he thought about using a 1,5 liter engine of Fiat, but later he changed his mind and fitted his car with a new – as from 1965 produced – 1,9 liter engine type CIH (Camshaft in Head) of Opel. He named his car matching to its engine displacement Bizzarrini 1900 GT. The engine and the chassis were held by a fine tubular frame, on which the plastic car body was fitted. Due to this car body the Bizzarrini had a weight of only 650 kg – a real lightweight. The weight and its 110 HP-strong engine ensured a sporty locomotion. On top came the aerodynamic shape of the car body. First of all its low height of only 104 centimeters enabled the 1900 GT to reach a good cd value. But also the long hood, which housed the 4-cylinder engine, and a flat rear design with a sharply dropping tail, did their bit to minimize the drag coefficient. All these features made a top speed of 210 km/h possible.

In 1966 the car was presented at the Turin Motor Show for the first time. But the serial production only sporadically came about and this is how it came that only a few cars left the plant. According to contradictory information, between 12 and 17 Bizzarrini 1900 GTs were built. In 1968 Automobili Bizzarini S.p.A. stopped its assembly of the 1900 GT and in 1969 the production was definitely ceased. MORE 1952 Otto Mathé Fetzenflieger (1:18)
In the 1950s the name Otto Mathé was well-known in Austria in the car racing industry. His do-it-yourself construction with components of VW and a strong drive of 130 hp of a Porsche engine led to the result that he was becoming the horror on all race tracks – also for significantly better financed factory teams.

In 1952 he moved his own developed and constructed monoposto race car to the start. A very low centre of gravity, a short wheelbase and the arrangement of the motor right before the rear axle were achieving an excellent weight distribution. The combination of a 100 hp Boxer engine and a very low total weight of only 400 kilograms enabled a maximum speed of 210 km/h. The exceptional race car was within a short period in all the racing industry and although the press had titled the car as “the most curious car of the year”, so the monoposto was lovingly called in the scene as “Fetzenflugzeug” and Otto Mathé enjoyed the reputation as a “Teufelskerl”. MORE 1948 Gatso 4000 Aero Coupe (1:43)
The sports car named Gatso 4000 belonged indisputably to the sort of cars, which were in need of getting used to in its day. The age, in which it was born, was the late 1940s and its birthplace was the Dutch Heemstede. Founder Maurice Gatsonides started with the production of his car after World War II. Gatsonides had a preference for powerful US-engines and so he chose a L-headed, liquid-cooled V8 engine from Mercury with a displacement of almost 4 liter and 120 HP. The chassis came from the French company Matford.

How big Maurice Gatsonides expected the reception for his car, was shown by his broad range of versions. Based on the same chassis he offered a two-seated convertible, a roadster and a coupe. In addition he presented a touring car for four occupants.

It is not unclear how many cars were built. There is information suggesting 11 pieces whereas other sources mention only 8. Further reports refer to even only 4 built cars – two coupes and two convertibles. MORE 1958 Triver Rana (1:43)
During the 1940s and 1950s the economic system of Spain was focused on establishing an own, national economy, independent from other nations influence. One of the measures was to charge imported goods with differential tariffs. As a result hardly any foreign products could be found in the Iberian market. In order to offer the Spanish population a cheap means of transportation, the public department in Biskaya issued the license for the production of a compact car.

In 1953 Construcciones Acorazadas S.A. based in Bilbao constructed a compact car, which was equipped with one front axle and a centrally arranged dual rear wheel, like the BMW Isetta. Against the access through a front door as with the Isetta, the constructers decided to follow the idea of a conventional car and located one door on each side of the vehicle. The car accommodated enough space for two adults in the front and two children in the back. The 2,65 meter short car was powered by an air-cooled, 2-cylinder boxer engine – located at the rear wheel – with 15 HP produced by 399 cc. The two-cycle engine was developed and manufactured in-house and factory specifications confirmed a top speed of 78 km/h. MORE 1968 Skoda Winnetou (1:43)
In 1968, a small roadster was presented to the public under the name Škoda Winnetou, which resulted from the initiative of the Swiss Borgward and Goliath importers, the company Glättli AG.

The company was not able to manufacture their own car, however it was dreaming of its own small, two-seater sports car. As they were also distributing the brand “Škoda”, besides the automobiles of Borgward and Goliath, they found a suitable chassis in the sedan MB 1000 in the product range of the Czechoslovakian brand for their own creation. The optics of the basic car hardly corresponded to the ideas of a sporty car with its conservative appearance, however with little fantasy, a racy small roadster could be derived from the engine and chassis.

In 1968 the company Glättli was presenting their prototype on the well-known fairs of Paris and Geneva with the feeling of putting an attractive small roadster on its wheels. On the information desk in front of the car it was written in big letters: “Winnetou – prototype – Škoda ”. The basic information was: 52 hp, a maximum speed of 125 km/h, a weight of 590 kilograms and a sales price of 7.900 Swiss francs. MORE Ford Thames 400E Team Lotus race truck (1:43)
Back in 1957 when the series production of the Ford Thames 400E started, it won the hearts of the British compact van scene. Soon the little Ford – powered by a 53 HP strong engine (as of 1963 with 55 HP) – was seen in various off-the-shelf versions in the left-hand traffic of the British island. However there were a lot of niches, which couldn´t be served by Ford. This brought some highly motivated mechanics to the scene that wanted to fulfill these customer wishes.

That represented a genuine alternative to the expensive race trucks for the less financially strong racing teams at that time. Beside the basic versions – built out of checker plate – were also a few pick-up versions of the Ford Thames 400E race truck available. It was possible to remove the lateral and rear tailgates to enable an easy loading. Doesn´t matter which version you had, convenient was the possibility to put one or two tires between drivers cab and racecar as a buffer. MORE Kahlbacher Schneewiesel K2000 (1:43)
On Tuesday, 14 May 1968 the company Toni Kahlbacher presented its caterpillar – named Schneewiesel K 2000 – at the mountain Kitzsteinhorn in Austria for the first time. The Schneewiesel embodied the idea to create a special vehicle that allowed ideal locomotion on icy and snowy off-road tracks in the Alps. The technical coup to achieve this feature was the change from tires to tracks. The vehicle was created from a considerable number of parts of the Steyr-Daimler-Puch Haflinger in the premises of the St. Johanner Straße 50 in Kitzbühl.

Sales promotion was primarily focused on operators of ski lifts and slopes, but fitted with the right caterpillar tracks it was also possible to utilize the Schneewiesel on earthy and stony surfaces. From 1968 until the end of production in 1972 totaled 81 caterpillars were assembled and sold by the company in Kitzbühl. MORE