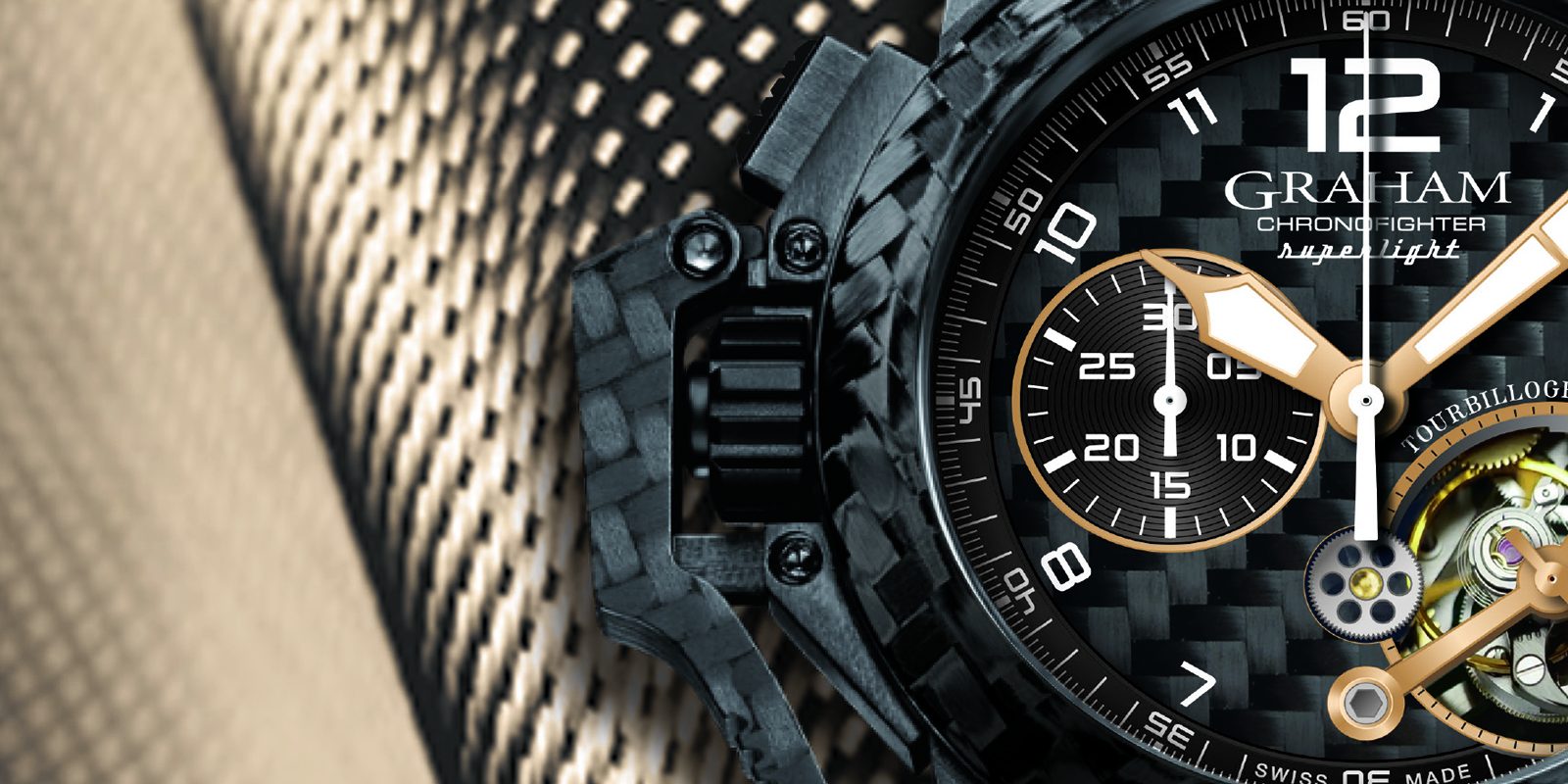 The trend of carbon fiber use in the world of chronographs is something we seriously love. Pairing the latest carbon fiber tech with something as (pardon the pun) timeless as a classic chronograph just seems right. Take for instance the new Chronofighter Superlight Carbon Tourbillograph. Carbon case, rubber straps… it’s anything but retro.

PRESS RELEASE: Let There be Light

What’s in a name? In the case of the Chronofighter Superlight Carbon Tourbillograph, an exquisitely crafted G1780 automatic column-wheel chronograph-tourbillon and fast-lane carbon technology. This translates into a 100-piece limited edition to mark the 10th anniversary of Graham’s very first Tourbillograph. These Swiss made timepieces move to the rhythm of dynamic contemporary lifestyles. Why keep a magnificent complication hidden away in a box when Chronofiable® certification to confirm its shock-proofing and superlight carbon make it good to go around the clock?

This black beauty has a 47 mm superlight carbon composite case. A carbon trigger, bezel, dial and buckle, as well as a tourbillon cage weighing just 0.485 g, contribute to the Chronofighter Superlight Carbon Tourbillograph being less than 100 g. In performance terms, movement details such as Incabloc® shock absorbers, black low-friction coating on the column wheel, an oscillating mass with ceramic coating and anti-magnetism are signatures of staying power. The progressive integration of tourbillon tradition, steeped in history, into a reliably sporty watch is mirrored by the watch’s entire design language. Two patented inventions were made in the process. First, the offset construction and the open cage of the Tourbillon allow other wheels of the movement to intersect with the Tourbillon’s orbital plane. This in turn allows a wider opening in the dial to see the device at work and integrates it completely into the movement. The inventors have named this design cintré.

The second is the Tourbillon which rotates between two characteristic bridges, designed for rigidity in a bent shape which is in the best tradition of English high precision timepieces of the 18th century. It makes the Tourbillon of the Chronofighter Superlight Carbon Tourbillograph more rugged and reliable than a Tourbillon volant or flying Tourbillon only mounted on one side. Even the black rubber reset pusher has a patterned Clous de Paris and easy to grip surface. And golden elements on the dial remind the carbon to keep its feet on the ground. Light is beautiful – and resilient.

GRAHAM traces its origins to London clockmaker George Graham (1673-1751) who is considered as the father of modern watch making. He is known as the father of the chronograph as he invented the start and stop device of the chronograph, the dead-beat and cylinder escapements, to name a few. He also built the master clock for Greenwich Royal Observatory which timed the majority of the achievements by the 18th century astronomers and sailors and lots of measuring instruments for scientists. GRAHAM SA was created in 1995 and develops outstanding and atypical watches in La Chaux-de-Fonds, Switzerland.